The town hall of Fairplay, the County seat, is located at the corner of Front Street and Fourth Street. Their phone number is (719) 836-4298. It is governed by a board of trustees and mayor. The Re-2 School District campus consisting of a high school, middle school, elementary school, and preschool is located in Fairplay, as are most of the County offices and services. 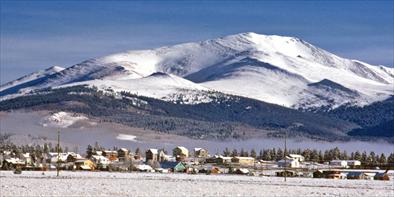 Fairplay was one of the first remaining gold towns founded in the Colorado Territory. At the height of the mining booms, its population rose to over 2,500 but now remains steadily at about 600. Fairplay has been designated the Trout Capital of Colorado.

South Park City Museum is an outdoor collection of reclaimed buildings from across the County arranged in what was once a portion of the old town. It still bears one of the names for the town, before it was dubbed Fairplay.

Alma is the highest incorporated town in North America and lies at the foot of Mount Bross, 10,578 feet above sea level. The town hall is located on Buckskin Street in a historic old schoolhouse. Their phone number is (719) 836-2712. It is governed by a board of trustees and a mayor and has a population of about 300.

It was first a small gold settlement but was incorporated in 1873 when silver was found in abundance on the surrounding mountaintops. Alma nearly died out in the 1980s but now is a lively, prosperous town with abundant historical sites as well as new construction.

Find information on the communities within Park County on Community Profiles.