Formation of the Mountains

At 1 time, the part of the United States that includes what is now Colorado was near the equator and was a series of islands in a large ocean. Around 250 to 300 million years ago, a ridge of mountains known as the Ancestral Rockies formed in roughly the same area as the current Rockies. Over time, glaciers eroded these 26,000 foot mountains into the deep valleys as the plates moved from tropical areas closer to the poles. Later, new activity pushed up the current Rockies from 40 to 70 million years ago, and volcanic activity oozed mineral-bearing water and lava up through the rock layers and formed the Colorado Mineral belt. The belt runs from Four Corners northeast through Breckenridge and on through Golden and Boulder, just west of Denver. 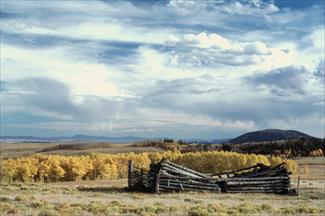 Gold Rush of 1859
Millions of years later in what was soon to become Park County, a trapper from Kentucky named Jim Pursley told Zebulon Pike, an explorer mapping the newly acquired western land for President Thomas Jefferson, that he'd found gold in the South Park, a big high-altitude basin in the middle of Park County. In that 1806 meeting, neither man was interested in gold. Pursley was trapping beaver and Pike had a report to complete.

When, in 1859, a prospector found nuggets and flakes of gold near what would soon become the city of Denver, the discovery triggered a stampede of gold-seekers and families looking for a new life in the Rockies.

Within a year and a half, the population of the area known as Colorado jumped from a few thousand Native Americans and a few hundred mountain men to more than 30,000 people. One-third of those settled in Park County where miners found millions of dollars of gold.

The gold rush brought both the affluent and the poor, soldier and settler from the Midwest, the East and even Europe to the high, wild country. Soon mining camps became towns and rough homesteads became ranches.

The land that had only been a summer hunting ground for the native people, soon saw families braving the high winds and winter snows to make it their year-round home. They built their houses, churches, and stores of logs and stones. Many of those early buildings can still be seen all across the South Park and many are still in use today.

As soon as the buffalo trails became wagon roads and then railroads, Park County became a mecca for tourists. Many of the first homesteads in Platte Canyon became hotels and restaurants for the hungry travelers heading for the gold country. Hundreds of visitors came on the trains from Denver and Colorado Springs to hunt, fish, sightsee, and pick flowers. When cars and highways replaced the trains, guest ranches and resorts continued to host visitors seeking to find the real Colorado.

Unlike many of the surrounding counties, most of Park County has changed very little. The wide open ranchland still hosts cattle, bison, elk, deer, and antelope, and the forests are home to bears, mountain lions, foxes, and lynx.

Residents of Park County still brave the elements for the privilege of living among the breathtaking scenery and abundant outdoor recreational opportunities that are a part of this area. Many of the historic buildings, mining camps, towns, ranches, and natural wonders are available for the visitor to enjoy.